Games for Windows was a Microsoft-branded online destination for Windows PC video games. Microsoft hired my team to design and build the future Games For Windows.com. They wanted a safe place for people to come to find out about Windows based video games. Many of the other online destinations were plagued by adware and other online hazards. Microsoft wanted a place where customers could find out more about and review their favorite game titles. It was desired that GamesForWindows.com was to be the PC companion to XBox.com. Translated into 18 languages and produced in three countries, it is one of the largest websites I've ever worked on.

PC games have no discernable common iconography. It comtains no common hardware, except for generic peripherals like mice or keyboards. When Microsoft came to my team and wanted to make a PC game companion website to XBox.com we began the task of brainstorming.

The XBox 360 had been recently released and was one of the best selling game consoles to date. So instead of trying some generic website styling we invented an “imaginary PC console” based loosely on the curves of the XBox 360. Similar but different enough that they might be cousins but definitely not the same. Thus the “fins” or “vents” were born.

The “vents” were loosely based on the XBox 360 hardware 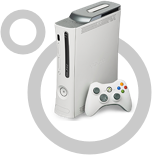